Another year has come and gone. The older I get the quicker they fly by. Lately, I've become more melancholy and reflect more and more on past Christmases and New Years.
Well, mostly Christmases. New Years was always fun, but Christmas, let's just say Christmas was special. It was a time spent with family, full of laughter and fun.
I think back to Christmases from my childhood. We always spent Christmas Eve at our house. Mom made a traditional Christmas Eve dinner and my uncle, aunt, and their four kids came over to share it with us. After dinner, everyone piled into their cars and we headed for Grandma's house.
Eventually, we kids grew up and the Christmas Eve dinners with my aunt and uncle stopped. With six kids in our family, it wasn't long before we filled the table on our own. I tried to remember when we actually quit the dinners, but we never quit going to my grandparents - well, not until they passed away that is
Christmas Day, after all the gifts were opened, found us at my uncle's for dinner.  They did it that way because my aunt didn't know how to make the traditional Christmas Eve dinner. Thanksgiving they alternated between our house and theirs.
Funny, we had many other aunts and uncles, but for some reason my mom's brother was always the one we shared dinners with. They were very close. Partners in crime some would say.
Ah those years were so much fun. I have many fond memories, not of gifts received, but of the good times. The years my uncle played Santa - long after many of believed.
Then there were the Christmases shared with my brothers and sisters - We always celebrated Christmas Eve. In the beginning my mom made the traditional meal for all of us, but as our families grew that ended. There were 14 adults, counting my parents and our spouses, and eventually 24 grandchildren. A bit much to make a meal for. As my parents aged, we kids decided to take turns having Christmas Eve at our houses. Oh what fun when we all got together. Kids and adults in the kitchen, dining or living room. Sometimes the kids went off to the bedrooms, or basements. Anyplace we could find room.
Of course, our kids grew up, married, and had kids of their own, with their own places to visit. My brothers, sister and I (a brother and sister have since passed along with my parents) still get together Christmas Eve. This year, there were only 3 of us as one brother went to Florida for the winter. We missed him, but understand. Some of our children join us as their spouses's parents have passed on also. This year there were actually 20 of us at my house. It's fun to celebrate the holiday with everyone.
As far as New Year's Eve , we never did much through the years. Sometimes we got together with my siblings and went out, other times with friends, more recently at one of my children's homes. New Years Day has always been a quiet day. One spent at home. Everyone always had to work the next day and after staying up and celebrating the night before, no one wanted to do much. Besides, the parade and all those football games were on TV.
So, as I look back over the years, it brings fond memories. This past year has been good to us in many ways. We camped - although not as much as I wanted to - and we bought  a house, which I love. So I look forward to the year ahead and wish all of you a very Happy, healthy, wealthy, and successful new year.


Check out  Books We Love to see where to purchase them from your favorite online retailer.

Posted by Roseanne Dowell at 10:04 AM No comments:

I always get nostalgic this time of year, remembering Christmases from my childhood. One of my favorite things from the season was going downtown to see the lights and decorations. We always parked and got out to walk along, looking in all the store windows. The windows in the department stores were decorated with animated characters. I could stand there for hours and watch  them. Of course we didn't, we had to move along, and the next window was even more fun to look at. I miss those days, miss my parents, especially my mother. She always made Christmas fun, baking and listening to Christmas music. Fridays nights my dad went bowling and Mom brought out the baking supplies. What fun making cookies, being silly, and singing along with her. One of the things I remember most about my mom was her singing. She sang all the time, while washing clothes, cooking, baking, or cleaning - often making up her own songs.

Another place we went to see the lights was Nela Park. The big GE headquarters. What a display they put on. We'd drive through the streets of the massive complex and oh and ah at the different displays. They quit allowing the public inside the complex in 1958 due to the traffic jams. This year, in celebration of their 93rd year of decorating, they allowed the public in on 3 specific Fridays.
My daughter, son in law, husband and I took advantage and went there last night. What a treat. They had displays from the 1920s to present day. Brought back a lot of memories, although I don't remember sitting in traffic for as long as we did last night.
I'm not sure which display I liked the most. They were all so beautiful. I've always loved Christmas lights and last night was a real treat. I'll always miss those days and think of them with fond memories. I hope I've passed on some happy memories to my children of special times. I think back on those days and even though we didn't have a lot, I never realized it, because we had a lot of love. We did things together that didn't cost money and it's more precious to me now than if I'd have had all the fancy clothes or latest toys. I never really missed those things. At least as I think back, I don't think I did. Maybe at the time, I wished I had more clothes, the newest toy, or expensive vacations, if so I have no memory of that and I'm glad.
Some pictures from Nela Park: 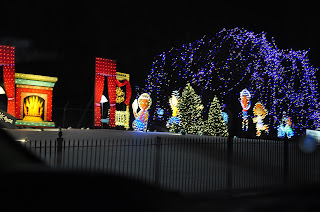 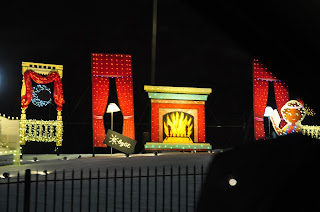 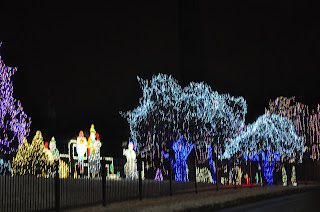 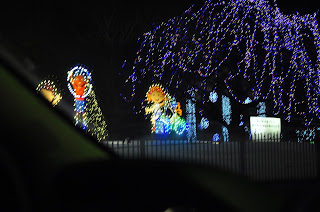 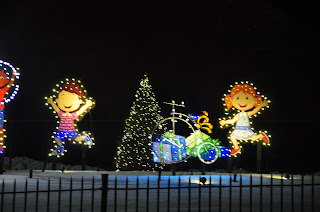 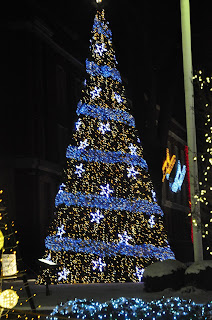 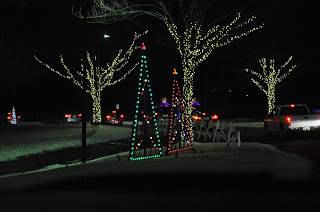 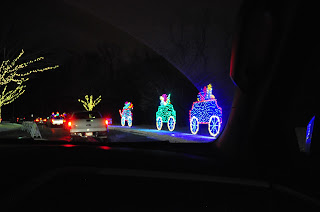 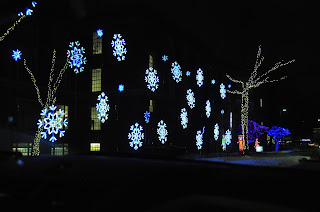