LOVE ON THE ROCKS 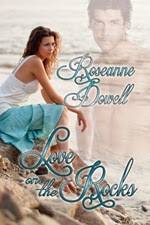 Blurb:
Author, Jordan Blake lives in a house along Lake Erie. She’s a recluse and likes it that way. No interruptions while she’s writing. At least not until that day in October when an early lake storm brews up. Not that she minds snowstorms. Far from it. She loves them. While she’s on her deck securing chair cushions and chairs, something along the rocky shoreline catches her eye. A body? Hard to tell from where she stood. Not being one to ignore someone in need, she rushes across the yard. It’s a body all right–a male’s body. Thank God he was alive, but unfortunately unconscious. After much pulling, rolling and pushing, Jordan manages to get him to her house and finally inside.
Both of them are soaked down to their skin. Jordan can’t leave him in his wet clothes, so sets about removing them. The stranger sparks something in her she thought was long dead.  Trying to ignore her feelings, she dresses him in an old bathrobe from her ex-husband. Unfortunately when he comes to, the attraction grows.  Jordan tries to ignore what she feels toward the stranger, but his kisses awaken something in her.  Something she’d rather wasn’t aroused. To make matters worse, the stranger doesn’t have any idea who he is.  For all she knows he might be a mass murderer.

Excerpt:
“Darn, it’s getting cold.” Jordan shivered and zipped her sweatshirt.  She hated storms, hated thunder and lightning most of all.  Grabbing at some papers that flew across the deck as the wind picked up, a movement caught the corner of her eye. Something washed up on the shore. Something big. A body?
Jordan jumped off the deck and raced toward the craggy shoreline.  Dark clouds hovered across the lake. Cold water splashed against her as waves crashed against the rocks like angry arms hurling water at an invisible enemy. The crash of thunder echoed across the lake. Ducking her head as lightening streaked across the sky and the air crackled with electricity, she thought she must be nuts. Probably just a bunch of old clothes washed up. Still, she had to see for herself.
Surely, no one in their right mind would be in the water this time of year? There had been storm warnings on the radio all morning. No one would be stupid enough to ignore the forecast. Would they? Heavy rain and strong winds then turning to snow, with a drastic drop in temperature, and blizzard-like conditions weren’t anything to ignore. Jordan winced as lightning flashed again, back-lighting the dark clouds.  Darn it, she wanted to be inside cuddling by the fire not out here in a storm. For two cents, she’d turn around and go back, but something drew her forward.
A man’s body against the rocks.
Oh, Lord, please don’t let him be dead. She had planned for a quiet weekend, writing. A weekend with a corpse wasn’t on her list of quiet, but she couldn’t leave him out here either.
Jordan came closer and stooped down next to him. Lifting his head out of the water, above the crashing waves, she felt for a pulse. Thank God, he’s alive. Now how to get him out of here? She grabbed his arm, rolled him over and tried to pull him from the fury of the lake. Wave after wave pounced on him, their foamy peaks trying to reclaim him. Lord, if she ever needed help, now was the time.  Struggling to roll him to higher ground, she lost her breath. His long, muscular frame outweighed her slender five foot two body and felt like dead weight.
“You’re going to have to help me.” Jordan grunted and gasped for breath when the full force of icy waves pulled her down and washed over both of them.
No response.
“Damn it. I can’t do this alone.”
Still no response.
Great, how was she going to pull him to safety? “I hate to do this, but I see no alternative.” Jordan took a deep breath and pushed him over, rolling him like a barrel and trying to avoid cutting him on the sharp rocks. It wasn’t easy, but at least he moved.
“Come on!” Jordan tried to encourage some life from his limp body.  Once he was far enough away from the waves, she stared at him for a moment, before leaning down to give him mouth to mouth. His long straight nose, eyes set wide with bushy eyebrows, and the grin on his lips, even in his unconscious state, sent a ripple of excitement through her body.
Not a handsome man, but something about him caused heat deep inside her. Shrugging off the urge to run her fingers through his curly black hair, she began mouth to mouth. When her mouth touched his lips, opening them slightly, something familiar tugged on her heart. She hadn’t touched a man's lips in, what, three years. This wasn’t exactly the way she imagined touching them again. Not that she ever imagined it. Never even thought about it. She’d had enough of men to last her a lifetime.
“Good grief, Jordan, you’re supposed to save him, not make out with him. What’s the matter with you?” The sound of her voice startled her. She hadn’t meant to speak out loud.
His chest heaved. He coughed, spluttered, spit water, and opened his eyes.
His gray blue eyes sparked something in her, bringing out emotions she hadn’t felt since long before Derek. Her stomach lurched. Jordan moved away, avoiding his touch. He tried to sit up and look around.
“Daisy,” he moaned. “Daisy?”
Jordan jumped up. Standing on tiptoe, she scanned the shoreline. “Who’s Daisy?” She continued to search, looking for a body, a dog,  who knew what. The rain threatened to start any minute. She smelled it. They needed to get to shelter and quick.
The temperature had already dropped, making the cool October air downright cold. Being wet didn’t help. Not seeing anyone or anything and receiving no answer from the stranger, Jordan turned back toward him.
“Come on.” She grabbed his hand and tried to pull him to his feet. He fell back and passed out again. “Oh great, just what I need.”
She lifted his head and tried to bring him around. Raindrops fell and quickly turned into a torrential downpour. She flinched as lightning streaked across the sky. Thunder boomed. God, she hated storms.
“Come on, wake up. Darn it all, why me? Why’d you wash up on my shoreline?” Jordan rolled his limp form over and over, stopping often to catch her breath. Unsure where the strength came from, she pushed his large body across the sand toward her house.
“Okay now.” With her hands under his arms, Jordan took a deep breath and pulled with all her might. Somehow she managed to drag him up the step onto the deck.

The wind whipped long strands of blond hair into her face. Freezing rain pellets pounded her, stinging her armsa right through her sleeves. Just a little more. Fighting the wind and gasping for breath, she pushed him through the door into the great room and fell into a heap on top of him.
After catching her breath, she sighed and rolled him across the floor toward the fireplace.
“That’s as far as you go, Bud.”