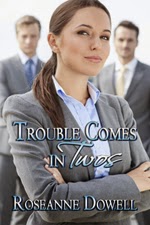 Kate Wesley left Twinsburg, Ohio five years ago after her fiancé jilted her. Now she’s back, happy and content with her single life. She doesn’t need men to fulfill her dreams, she has her florist shop. At least she didn’t until Mark Westfield showed up looking for his sister. Kate didn’t much care for the attraction she felt toward him. To make matters worse, her ex showed up, now one of Twinsburg’s finest and her heart about dropped to her feet. What was wrong with her all of a sudden attracted to two men?
Widower, Mark Westfield wasn’t interested in women. He had twin five year olds to raise and they took all his time and energy. But Kate sparked something in him he hadn’t expected to feel again.
Adam Shaffer left Kate two days before the wedding. Left a note and took off to LasVegas. Biggest mistake of his life. But now they were both back and he aimed to get Kate back. They’d both been too young before, too immature. At least he had been. Kate always had her head on straight. But he had a dream, and he needed to see it through before he settled down. Now part of that dream came true, if he could just make Kate see he had changed.

Excerpt:
A shadow passed over the doorway, and Kate realized she wasn’t alone. She looked up.


Adam stood in the doorway, the same cocky grin on his face. “Now that’s settled, how are you, Kate?”


Kate couldn’t believe it. Couldn’t he take a hint? “What do you want, Adam?” She didn’t care if she sounded angry. He deserved angry.


Adam came into the work room and stood in front of her. “You look great.”


Kate looked away. So did he, but darned if she’d tell him. He looked too damn good. What was the saying? Fool her once, shame on him, fool her twice, shame on her. Nope, she didn’t need him or anyone like him.


“So what do you want? I gave you all the information on Emma. Shouldn’t you be out investigating?” She picked up a flower and set it in a vase. Her heart beat so hard, it surprised her that he didn’t hear it.


“Look, I know you’re still upset about the wedding, but give me a chance to make it up to you. How about dinner tonight?”


“I’m busy.” Still upset? The man has no idea. Like we should pick up where we left off? He’s got to be kidding.


“I’m busy tomorrow, too. Look, Adam, just go, okay. I don’t want to have dinner with you. Not tonight, not tomorrow, not ever.”


“Come on, babe, don’t be like that.” Adam moved a strand of hair behind her ear. “I don’t blame you for being angry. But damn, it’s been five years.” He ran his finger along her cheek. “The least you could do is give me a chance to explain. Not that I’m sure I could. I’m not sure, even now, why I took off. Cold feet, I guess.”


Kate trembled at his touch. A spark of something familiar tumbled in her stomach. She pushed his hand away. Try as she might, her anger shattered.


“How dare you walk in here like nothing happened? Like we’re going to pick up where we left off?” Kate spoke through clenched teeth. What she really wanted to do was lash out and hurt him the way he hurt her, but a customer might come in and screaming wasn’t going to help anyway.


Adam stared at her, a look of confusion in his dark eyes. He just didn’t get it. He really didn’t see anything wrong with what he did. Took the coward’s way out and left her to deal with canceling all the wedding plans. What a jerk. “Look, just go.” She turned back to her work and picked up a vase to fill her next order.


Adam ran his hand through his dark, wavy hair. Hair she used to love to run her fingers through. She could almost feel the soft, silkiness of even now.


The bell rang again, and before she had a chance to react, Mark stormed in. Kate’s stomach did a flip at the sight of him. What was wrong with her, reacting to these men this way? For five years men had no affect on her.


Now in the course of an hour, the two of them managed to get under her skin, causing feelings deep within she hadn’t experienced in years. Feelings she didn’t want to feel.


Mark stared at them for a second. “I don’t know what the two of you have going, but why aren’t you out looking for my sister?”


Kate shuddered at the angry tone of Mark’s voice. “There’s nothing going on between us, Mr. Westfield. I just suggested the very same thing to Detective Shaffer,” she said just as angry. “Now if the two of you will continue this outside, I have work to do.”


“I’ll call you later, Kate.” Adam acted as if everything between them was settled.


Par for the course. Wasn’t that always how it was? She got mad, spoke her mind, and that was it. Over and done with.


Adam went on doing the same things he always did. Didn’t matter if it upset her. Poker every Friday night with his friends, no matter how angry she got.


How they had managed to plan the wedding was beyond her.  Not that he did any of the planning. Adam didn’t even want to see the hall or listen to the band.
No wonder he didn’t have any qualms about canceling the wedding. He didn’t do any of the work for it. Obviously, he wasn’t ready to get married. So why had he asked her? Asked her, heck, he had insisted. Even when she suggested they wait a year or so. He at least owed her an explanation. But did she really want to hear it?